Tonight you are a komodo dragon; everyone else is mice.

Tonight your every gesture brushes crumbs into a palm,
the genetic evidence of an eyelash

taken up in the beak of some toy bird with good instincts,

who knows how to prevent the slow inversion of its bones
through the pores of its paper skin,

staff & notes as seen from the back of the page of a score
held in front of steady light.

Tonight you are the lighter; I am the cigarette meant

for wind that turns on the chance the architecture met
like buildings in a busy intersection,

which are not yet infinite, but it seems every corner
has a cat backed into it

that is indifferent to rescue. Tonight you are the knife

when the flesh of the fruit will give is to cut a great deal,
enough for everyone.

Tonight you are the event & I am the question black tie
or black suit,

weeks in dream-time, like a trip of saddlebags & sway
ending in a rush of parachute.

I am a noise above the pavilion while you’re the report
No sign of her, sir.

Vents tonight release orchids of steam, almost perfected
into a geometry of columns

the archeologist no one is rooting for paces in, hands clasped

behind his back, a prisoner who is obviously free to go
but doesn’t, some shaft of light

he hasn’t broken with his body yet his sure to trip
a sensitive trigger,

all it requires is the will to blunder further, some Aramaic
or shorthand, an esoteric passcode

emanating like magnetism from his mouth. You are your name;

tonight & every night are the same; I am the point at which
the imperial slips

from being merely amnesic to humble, a forehead set against
the cool step of a temple in Europe,

the return home suddenly huge, because there is no moon. 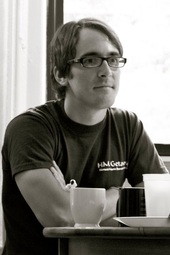 W. M. Lobko’s poems, interviews, & reviews have appeared in journals such as Hunger Mountain, Slice, & Boston Review. New work is forthcoming from Seneca Review, The Literary Review, & Grist. His work has been nominated for a Pushcart Prize. He is a Founding Editor of TUBA, a new review of poetry & art. He studied at the University of Oregon & currently teaches in New York, where work on his poetry & his novel The Quick Brown Fox doggedly continues.