On dirt-packed roads that thinned and fell apart
like breath in winter, we sputtered along
in our car, a yellow coupe with a memory
for recording groves of myrtle and secular pine
in kilometers. For six days we milled around forts,
bays, and bare, gold dunes stormed and conquered
too often to accurately count
on the island shaped like a foot, no, the print
of a foot—God’s, in fact.
Or so the locals say.
At the rough, southern tip
where the limestone runner’s heel
would have first struck, we break bread
at the wobbly table we’ve claimed as our own
for the last time and take in every detail:
the sleepy violets on the table,
the handmade menus that smell like fish,
which is to say fresh
off the boat, and the waiter,
the lanky one missing teeth
whose mouth sounds like a piano
tuned for serenades,
who is flirting with you
while I sit and grin
as I imagine Odysseus must have grinned
at his wife’s bold suitors
because we are in the birthplace
of the dropwort after all, that sweet
ditch-daisy Carthaginians brewed
for criminals and the elderly,
who, knowing no better drank it
and danced as their faces twisted
into a smile Socrates would have known,
that tender old clown
who saw the humor in death,
who would have seen the wisdom
of spending the last of our jigsawed days
feasting and raising our glasses
to the most merciful god of glee
until laughter did us part.


What joy to say our short, winter days
are behind us now. Gone the old life we filled
with empty laughter, the times we’d pack
the backseat with every hitchhiking clown
we happened upon—our record was eight
until the year our fathers died. Gone
the red-nosed hours, our grotesque smiles
drawn large and wide, when we rehearsed
our cold routines of “Hey, are you ok?” and “Fine.
I’ll be fine.” Remember the long seconds—three
slow ones in all—before your face
that took an hour to apply turned grave
or the look you wore, sadder than any clown’s
in the rain, that was my cue to knit my brow
and continue fumbling with the three-sizes-too-small
hammer you handed me so I could once more fix
the swaybacked rocking horse we purchased
to ward off an unspoken future in which we
are continents apart, surrounded by our hungry
new families as we slice and dismantle
the same braised roast and lament how
we could have let hope stray, how the story
of our lives might have been different
if it had contained, however lame, something
we could have ridden into the sunset on. 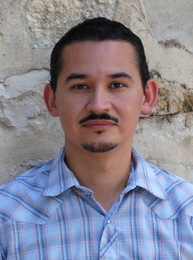 Tomás Q. Morín is the winner of the 2012 APR/Honickman First Book Prize for his collection A Larger Country. He is co-editor with Mari L’Esperance of the anthology,Coming Close: 40 Essays on Philip Levine. His poems have appeared in Slate, Threepenny Review, Boulevard, New England Review, and Narrative.
The Paris-American
Copyright © 2020 The Paris-American
About • Contact • Submit • Archives • Support