From Sonnets to the Humans


Then did you build this gallows,
calling it a natural cause,
consenting to abandon breath,
belief, and memory on it? Was
I one night, with cognac,
under the scaffold,
washing the feet. Because
there is no grace except
of the thinnest
duration, I, too, was
hanged, but at a distant station,
and grace has a half-life; grace
is a state one stage
decayed from perfection.

64   The Paris-American
From Sonnets to the Humans


There is nothingness in you,
he said, that pulls me, partial vacuum.
You are crushing me, she said.
Accepting, taking: twined
one zero threads
in the shirt he takes off.
A prow with a white marble victory
figurehead, wings broken
into the water, touched the other
shore. Crushing marble
to powder, coarse
like marrow in a bone cut
lengthwise and dried in the sun
until there is a nothingness in you. 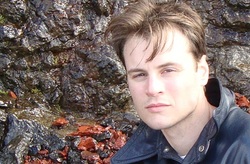 Theodore Zachary Cotler is the author of House with a Dark Sky Roof (Salt, 2011) and Sonnets to the Humans (Ahsanta, 2013), which won the Sawtooth Prize. In 2011, he received the Ruth Lilly Fellowship from the Poetry Foundation. He's a founding editor of The Winter Anthology.