Up on the mountain as she rose above
Treeline came the unexpected bodies:
The woman slightly burned, the man curled

Against her in one last concern
Of knowing. What to do with this sight
Said she to the no one there,

How you must not go too far up into
Good weather. Perhaps they had no idea
How to pay attention. How much did they want;

At what point were they going to turn back
Down. To be close enough to see beyond
Her own desire is how she must now live.


Perhaps she called out for him to undo
What was around her. Or he found himself
Cutting the relentless into smaller, into

Meaning, into weight. What begins the fall;
Who first saw the path made clear, each tool
Practiced in the dark or the last space left

Which could open enough. Did she climb
Out over his dusty and fearful hand,
Or did he pull her from the still place,

The ache until one caught against the other.
Piece by piece was recognized. Beauty
As the way through. But what is done to the stone

Is also the stone. How much does he take
Before we can no longer bear to look. 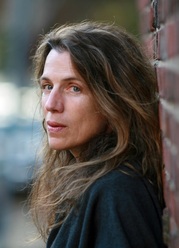