Sitting beside this ancient gray
fountain, I’m thinking that you are probably
alive somewhere in the world,
and I don’t know how I feel
about that. You’re tightening
the screws of a run-down swing set
in an apartment complex in Hollywood
and winking at the girls
who are waiting on the grass for you
to finish: girls with Lisa Frank notebooks
in their backpacks and macaroni and cheese
in their teeth, girls who
don’t even have breasts yet,
girls with mothers
who fishtailed their hair
before school that morning and fathers
who won’t let them see
PG-13 films. Or maybe
you’re eating a peanut butter sandwich
in a prison cell, peeling away the crust
like a bitter store clerk
tearing the dress off a mannequin. You’re buying
extra-small thongs at Victoria’s Secret. You’re sinking
your nails into the skin of a peach.
You’re licking your fingers. I think
I need to stop thinking. I think this fountain
is made of the same material as tombstones.
I think that if you ever
met the moon, you would
grab her by the throat.


about the time we stole pears in Surprise, Arizona
and let cornfields undress us
in Assumption, Illinois
There were terra cotta armies in our hearts
We listened
to the shell’s mouth
And tell me how the day poured its honey
over everything, and after,
the memory of everything
How we wore our skin like a question
There was lidocaine, yes, and apples
from the cemetery
And tell me how our tea danced
to the tides of the moon
How I got sick
That I got better
Leave out the part
about the air being toxic,
how it opened us
like figs
Tell me instead
about my eyes
under the ponderosa tree
What was it you called them?
Red wine
on a shard of glass 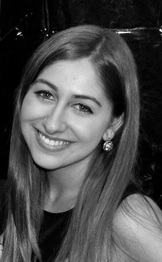 Originally from Kishinev, Moldova, Ruth Madievsky lives and writes in Los Angeles. She studied creative writing and biology at the University of Southern California, where she received the Edward W. Moses Creative Writing Prize for fiction and the Phi Kappa Phi Student Recognition Award for her poetry chapbook-in-progress. Her work has recently appeared or is forthcoming in RHINO Poetry, The MacGuffin, The Doctor T.J. Eckleburg Review, and Atticus Review. She is a graduate student at USC's School of Pharmacy.