Quiet is one language of war but
Most importantly only one

The shore edge foam and caw of water
You lose 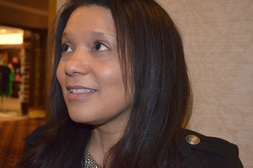 Ruth Ellen Kocher is the author of Goodbye Lyric: Gigans and Selected Poems (Sheep Meadow Press 2014), domina  Un/blued (Tupelo Press 2013), One Girl Babylon (New Issues Press 2003), When the Moon Knows You’re Wandering, Winner of the Green Rose Prize in Poetry (New Issues Press 2002), and Desdemona’s Fire winner of the Naomi Long Madget Award for African American Poets (Lotus Press 1999). Her poems appear in various anthologies including, Angles of Ascent: A Norton Anthology of Contemporary African American Poets, Black Nature, and  From the Fishouse: An Anthology of Poems that Sing, Rhyme, Resound, Syncopate, Alliterate, and Just Plain Sound Great. She has been awarded fellowships from the Cave Canem Foundation, the Bucknell Seminar for Younger Poets, and Yaddo. She is Associate Chair of English and Director of the Creative Writing Program at the University of Colorado where she teaches innovative Poetry, Poetics, and Literature, a Contributing Editor at Poets & Writers Magazine.
The Paris-American
Copyright © 2022 The Paris-American
About • Contact • Submit • Archives • Support