I Was the Girl Who Set the Field on Fire


It was summer.
The dry grass harrowing ankles
and small yellow moths drifting
among tasseled heads.
Someone had left a can of lighter fluid
beside the trash cans. There
were plastic chairs,
womanly with their smooth white arms.
When she spun, the world tilted and blurred
to a golden rush.
Drops flew from the red can,
became the throng of this new hour,
stung and swarmed her limbs
lightly buzzing a song
she knew.
She lit the single match
filched from its watch house
above the mantel––
the rough cap
flaring into sunburst––
the world a slingshot
flinging loose its load
of unfixed colors.
The pitch transformed
then into ripples
which spread to flaming trails, concentric
and growing wider around this girl
held in the thrall of her own knack. 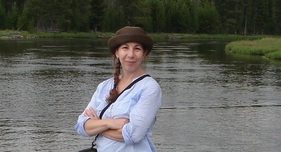 Rebecca Aronson has poem recently or forthcoming in Quarterly West, Pilgrimage, Tin House, River and Sound Review, Cimarron Review, and others. Her first book, Creature, Creature, came out in 2007. She lives in New Mexico where she teaches writing and coordinates a visiting writer series. She is a member of Dirt City, an Albuquerque-based literary collective.
The Paris-American
Copyright © 2022 The Paris-American
About • Contact • Submit • Archives • Support