He came into my room like a god
stepping out of a painting.

Back from the wind, he called to me
with a mouthful of crickets--

scent of ash and lilac rising
from his hair. I waited

for the night to wane
into years before reaching

for his hands, my finger tracing
the broken lines in his palm.

My shadow beneath his shadow
across the hardwood. And we danced

swaying
over a broken chair.


I don't know the name of the white mare
swaying in early light, her mane tinged blue

with rain, but my mouth has found
the warmest vein beneath

her jaw—and so what
if my bones were hammered

into the shape of a man's
regret. I'm only here to increase

the silence, despite music. And it's hard
to pray with just one word

in the chamber—but I try. Like you,
I try, willing as the hand that holds me.

Like you, I thought I heard the thunder
of a world coming to its end.

It was only the sound of hooves
running nowhere. 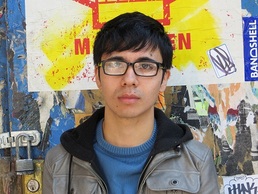 Born in Saigon, Vietnam, Ocean Vuong is the author of two chapbooks: No (YesYes Books, 2013) and Burnings (Sibling Rivalry Press, 2010), which was selected by the American Library Association's "Over The Rainbow" list of recommended LGBT  reading. A Kundiman Fellow, he is a recipient of a 2012 Stanley Kunitz Memorial  Prize, an Academy of American Poets Prize, as well as six Pushcart Prize  nominations. Poems appear in American Poetry Review, Verse Daily, Southern  Indiana Review, Guernica, Poetry Northwest and Drunken Boat, amongst others. Recently, he was awarded a 2013 Poets House Emerging Writers Fellowship and was a finalist for the "Discovery"/Boston Review Poetry Prize. He lives in Queens, NY. (www.oceanvuong.tumblr.com)
The Paris-American
Copyright © 2019 The Paris-American
About • Contact • Submit • Archives • Support