This life was supposed to be

But there is a city full of lamps

is to say I am hiding something greater

than a ten dollar bill      behind my face

the way it rips a wedding dress

into the anemone of the people

until the neighborhood buries me

a robe      it thinks there is a yellow body

a noun that never married         its fast-forward 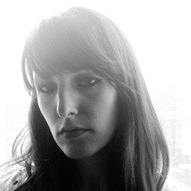 Meghan Privitello's first book, A New Language for Falling out of Love, is forthcoming from YesYes Books (Fall 2014). Poems have appeared or will appear in Kenyon Review Online, Gulf Coast, Sixth Finch, Pinwheel, Drunken Boat, Boston Review and elsewhere. She currently serves as co-editor of The New Megaphone. You can follow her on twitter @meghanpriv.