Your Voice is a Large Stone Grinding Away the Walls


Often I dream of night falling in peacock trains that barely light the earth,
and from the porch of a county seat dragged out of red clay--its pillared bones
glistening like wet knives--I can count the hundred star-eyes.

Before morning seeps from the cracked trees and the view of these woods
is left for blood lines of dawn, I can see you rise from the moon blue
fields of rag weed and feral corn stalks, your crutches like wings.

Is it you who watches for me, who picks the dirt from my feathers? Or,
when hungry dogs gather outside the fence, their meanness sinewed and jaws g
leaming with sacrifice, is it you who opens the gate?

It's no coincidence that your nakedness is the word for wolves in moonlight,
that you believe cruelty is the first act of grace. Because a chicken can't fly,
you teach it to jump. If the blind complain, you wash their eyes out with lye.

Another dream goes like this: A young woman is furiously sweeping
in a dirt yard trying to erase her pigeon toed tracks, or she is crouching
over the shorn breast of a hen counting teeth marks along the broken neck.

I would like to comfort her, to place my hand on the crooked bough
of her shoulders and feel her breath rustle around the ashen dogwood hearts.
I would like to say that, after time enough, even Argus fell asleep.

How strange then, on nights when you arrive in a high, rat-colored car,
dressed in preacher blues with a hat as wide and sharp as a street corner,
when you hold my own infirm body under water, I always forget to struggle.


The sparrows are figuring
their complaints again, beech nut

by beech nut, by rattle
and commotion.

Another plank falls off the boathouse.
A little more wind.

By the gutted riverbed, a ferry horse
beats the earth into a pattern like day

and night, day and night.
The moon with its fossilized crown

from a catacomb of pines.
The hogs bump blindly

against the axe handle.

There is a kiln in the basement
brimming with rat skulls.

There are enough notches
in the dinner table to sharpen teeth.

On the front porch, a girl is drawing
plates of breast bone, belly fat,

pickled spleen for the feast.

Three crows are arguing in the yard
over loose strands of hair, beaks

furious at work, three sisters
knotting the fingers of an old birch.

Through the fog, a suckling cry--
spoons ringing in their empty cups.

During the day a bridge is a fishbone caught
in the throat, a beached whale, and often in the sun

the froth of tidewaters,

a disappearing act, a glitch buried in the deep sludge-
mud of our nerves.

By night it’s a natural type of fire,
the anemone glow of headlights

shift inside their constellations. We hold our breath.
We tuck the salt air into our pockets and wrap

scarves of wind around our necks.

Vision is such a casual ballet.

Maybe you never thought
the earth could be this flexible. It has always felt flat.

But those sodium lights are really meant to woo
the darkness. They are the white flags of surrender.

There is a bridge in China. At least once a week,

someone throws himself off of it.
That’s almost enough to set your watch by.

Do the dead in the Yangtze act as mediators
between the two shores? Do you know anyone

at the bottom of this river we can depend on
to level the playing field?

Each map has its own scale.

When we count the distance of lightning
your seconds are longer than mine. I’ll be honest

when I lie. I don’t know your name. You are
a smaller version of me. 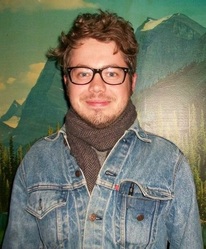 Matthew Zingg's poetry has appeared in The Madison Review, The Awl, Muzzle, Blackbird and Opium Magazine, among others. His criticisms can be read in The Rumpus and forthcoming in The American Reader. Zingg received his MFA from Adelphi University and lives in Brooklyn. Photo was taken by Jillian Brall.