After, alone
broke down on a highway one hundred miles
west of Laramie. Shadows bend snow-fences
over hills toward the end of America--
through wheatgrass braided like rope
two feet high and falling in one long tide
as the wind sweeps clear of the trees.

Suppose I can say anything
to him now—infinite
unchained from life.
In the luminol dash glow
my thoughts turn the floodlights
to a tether. He’s out there just beyond reach
ready to disappear.

My favorite picture of him
is a mug shot. There was a night when my parents
were in love before I was conceived
and the slow drift between them
wasn’t noticeable—he’d knocked a man out,
broke his nose. In the picture he’s young
wearing a rugby shirt, back against white cinderblocks.
He’s laughing, the way a smirk
cuts at his cheeks. And his shadow
permanent on the wall
dark enough to fall asleep in.

Once, young and wild in the mountains
I never thought who else
might one day spread out a blanket
in thistle or dust—stare up at night.

All that dead light
sure to outlast everything
I love. 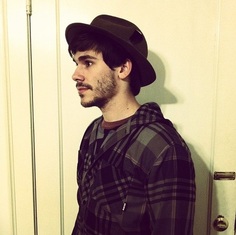 Matthew Wimberley is a Starworks Fellow and MFA candidate at New York University. A finalist for the 2012  Narrative 30 Below Contest, and  semi finalist for the Slope Edition  Chapbook Contest, his writing has appeared in Rattle, Puerto Del Sol,  and Connotation Press, where his poems were introduced by Dorianne Laux. Wimberley grew up in the Blue Ridge Mountains with his two dogs and  spent March and April of 2012 driving across the country. A Localist  poet,  he currently resides in Brooklyn where he is completing his first book length manuscript All the Great Territories.
The Paris-American
Copyright © 2020 The Paris-American
About • Contact • Submit • Archives • Support