O hammering body
made of the teeth of saws,

made of mallets turned
on the lathe,

sharpened pencil, o jar of rust,
catacomb for the nail,

tap and die, o threaded vacancy
in the wood, cantankerous

let into the case before
the lead is cast,

the impurities sent out
in black smoke,

o on switch and tripped
breaker, dim light for

and C clamp, rough stock
in a stack in the corner,

send the news ahead of time;
I will listen for your every word. 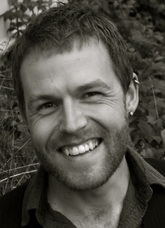 Matthew Nienow's work has recently appeared in Crazyhorse, Narrative, New England Review, and Poetry.  A 2013 Ruth Lilly Fellow, he has also received fellowships and awards from the National Endowment for the Arts, the Elizabeth George Foundation, Artist Trust of Washington, and the Bread Loaf Writers' Conference.  "The Shipwright's Prayer" is included in his completed manuscript, House of Water.  Matthew lives in Port Townsend, Washington with his wife and two sons, where he builds boats and works as a writer-in-residence at a small independent school.
The Paris-American
Copyright © 2022 The Paris-American
About • Contact • Submit • Archives • Support