For Love of Ice


I have shivered over sidewalks
all my life, coughing night
into the hollow of a fist
that I can't warm,
that I can't seem to steady right
against cold lips.

I have been windburnt by a trick
of winter mist, shadow
in the eye that couldn't be
what I had wished:
some form, some figure in the snow
to console me.

I have walked for hours underdressed
to feel frostbite glove
my hands and wrists and I
have clung to pavement
staring veins into its ice:  in love
with nothing's eyes.


again, and on a day
you meant to spend

in other ways than tracing
veins of it descend

the dusty plate glass
of a window by the bed.

Try to make a friend
of anything you can

that’s kind enough to give
back what you lend

to its reflection;
tomorrow you will 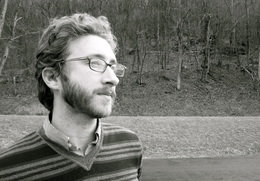 Malachi Black is the author of the poetry collection Storm Toward Morning (Copper Canyon Press, 2014).  His poems appear or are forthcoming in AGNI, Boston Review,Gulf Coast, Harvard Review, Narrative, Poetry, Ploughshares, and The Southern Review, among other journals, and in several recent anthologies, including Before the Door of God:  An Anthology of Devotional Poetry (Yale U.P., 2013), Discoveries:  New Writing from The Iowa Review (Iowa Review, 2012), and The Poet’s Quest for God(Eyewear Publishing [U.K.], 2014).  The recipient of a 2009 Ruth Lilly Fellowship, Black has since received fellowships and awards from the Bread Loaf Writers’ Conference, Emory University, the Fine Arts Work Center in Provincetown, the MacDowell Colony, the Sewanee Writers’ Conference, the University of Texas at Austin’s Michener Center for Writers, the University of Utah, and Yaddo. Black was the subject of an Emerging Poet profile by Mark Jarman in the Fall 2011 issue of the Academy of American Poets’ magazine, American Poet, and his work has several times been set to music and has been featured in exhibitions both in the U.S. and abroad.  He is Assistant Professor of English and Creative Writing at the University of San Diego.  For more information, visit www.malachiblack.com.