Ode to the Grotesque


Predawn cold, and the jet stream of breath
jumps from the snout. The skin’s final form
could be blistered. So says the hands. So says
the bark that half moons the split log.
So says the axe head and sweat lacquered shaft.
A whole cauldron of steam can rise
from the humped shoulders when the body
becomes the blade. One can look villainous,
but what if beauty is the beginning of a terror
we can barely stand? So says Rilke. So says
the Cyclops, the ogre, and the monster
taunted by flame. There was a time
I was afraid of him—this father
carrying wood in his arms like a babe. 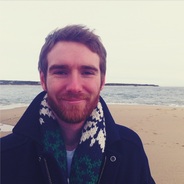 Keith Leonard is the author of Still, the Shore (YesYes Books), a chapbook of poems. He has held scholarships from the Bread Loaf Writers’ Conference, the Sewanee Writers’ Conference and Indiana University. His poems are forthcoming from Colorado Review, Gulf Coast, and Redivider, among others.
The Paris-American
Copyright © 2021 The Paris-American
About • Contact • Submit • Archives • Support