Child Trapped in a Barn Crypt

First the breathless flight
from the village, the whip's

small script on your tongue. Then stench,
then rest, then silence. You'd not thought

such spectacle persisted: thick wool
shifting in darkness, each beast

to its own monk's cell.  It was winter, then
winter, then winter. Remember the door

as an orphan's dominion?
How you crouched in a piss-laden

cellar, while the blade's hymn
whispered for more? Moon-

alone, into hunger, where the floor's
good granite

surrendered, in the crook
of your cold-stone

hollow, in the ghosts
of the arms of the poor:

the lamb's blood thick
on your jaw now, where the wind's

and see, and surrender,
as though filth were the brilliance's door.

The wind tonight is a mere
savant in the throes

of his deep prayer again and you are here, still,
when I drift in,

a small bowl
in my hands like the nest

of some unfledged darkness, your own
bread's odor in my clothes.

Take this, woman, and eat
it, the moon's coins uncounted

is nothing,
the negligible music of a dressage harness.

Let the wind's hands
riffle these hymnals, their script

shrouding their croon.
It is only your son

come homeward
to lift up your long hair

from moonlight
like the hem of a mooring rope,

broken, to fold down
your own hands forever.

I remember the years of our slumber.  Someone
had wounded you, and you could not say.

A young man hung above you, in briar.
Years happened.  Fire.  The wind blew the walls

away.  I drifted
in a spruce wood, bluebells matting

was white where I traveled.  Milk-deep.  Brimming
with opal.  I smelled the darkening

pines of a mooring, the ripening
cliffs of another.  Something was rising

from the fathoms.  I thought of rooms at the edge
of a pasture, hornets

dismantling their rafters.  Of a dark wave rising
from your body, its music

in my hands, no harbor.
Of the wind, of the word

of your hours, its hand clasped over
its whisper, like a monk in a shattering

cloister.  Of the horrible Archer
in the star-lanes, laying his bow

on my whisper.
Of his strength.  Of the taste

of his armor.  He was No One.  He was never
our father.

He was going to shoot me out farther
where I could visit you no more.

Like the Dutchman who hacked out
a 2,000-page treatise on the soul

of bees, I was doing my work:
Autumn. Winter.  I was trying to love

at Wolfsgarten, then stood
in a scherzo of blizzard

until she perished of bitterness for this world.
I was trying to hold

the feral face of the possum
like the wild boy of Avignon, moving its slow

lips that would not end.
I was Leviticus.  I was Revelation.  I was

the child excavated from the battlefield at
Agincourt, then hanged

a second time,
moths in the moonlight of her forearms.

One night
I will whisper it, in toto: how I discovered

my dead to its vigil.  How obsession
wore his silk-red

kimono, his wine-dark
mouth at my table.

How I was neither
the falcon nor falconer,

the singer the singing
nor song. 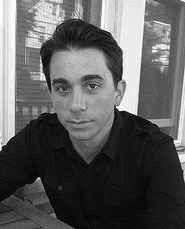 Joseph Fasano is the author of Fugue for Other Hands, due out from Cider Press in January, 2013. His poems have appeared in FIELD, The Yale Review, Tin House, The Southern Review, Boston Review, and other publications.  He won the 2008 RATTLEPoetry Prize for "Mahler in New York," and he has been a finalist for the Missouri Review Editors' Prize, the Kinereth Gensler Award from Alice James Books, and the Times Literary Supplement Poetry Competition, as well as a Pushcart Prize nominee.  He teaches at Columbia University, among other institutions.  About Fugue for Other Hands, Jeanne Marie Beaumont has written, "...this book  embodies 'further, deeper, wilder'...it is never timid or tamed, has no easy comfort or uplift to offer but immerses us in the disturbances of living on this mortal earth from start to finish."
The Paris-American
Copyright © 2021 The Paris-American
About • Contact • Submit • Archives • Support