If not for hopscotch

in the parceled woods

but the blacktop called

that yip of dangerous

that gravity was broken here,

And today I think of them

to cuff the lowest limbs

and test stems that remain,

even in dreams, invisible,

and the memory of boys

older than me with wrists

thick as my neck, punching

the basketball into a confusion

of leaves to break our story,

until giving up, done,

they said, with our bullshit. 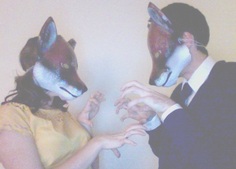 Joe Betz is an English instructor at Ivy Tech Community College in Bloomington, IN.  He earned his MFA in Creative Writing from the University of Missouri-St. Louis in 2010.  Recent poems appear in Anti-, Portland Review, and Natural Bridge.  He hopes you liked his poem. His wife chose this picture.