The guy that could fuck sailors
And throw a punch,

“A bedlamite speeds to thy parapets,
Tilting there momently, shrill shirt ballooning,”

He meant himself.
A circle on the surface of the ocean,

For a second,
And then the bottom of the sea.

124 The Paris-American
"Hart Crane's Tomb" by James Franco copyright (c) 2014 by Whose Dog R U Productions. From Directing Herbert White and used by permission of Graywolf Press. www.graywolfpress.org. 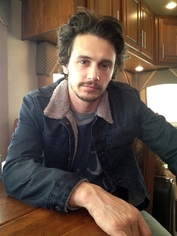 James Franco is an actor, director, writer, and visual artist. His first full-length book of poetry, Directing Herbert White, is forthcoming from Graywolf Press in April 2014.