Two poems by JAMAAL MAY

Hum of the Machine God


There isn’t much to discuss with the Machine
God, though its voice is hard to ignore;
it speaks in planks of wood shaped for the sea,
sputters of smoke, eats grass. It speaks in snow
spit into piles, commands the motion of a needle
through a hem. It hums. It waits.

Once, in a parking lot, it spoke to a boy waiting
for an exchange between a sewing machine
and his mother to come to an end. Mother’s needle-
skilled fingers had already learned to ignore
pain, but the boy’s hands were supple. The snow
under Father’s idling car became a sea,

running into drains towards another sea
the boy hoped and hopes is out there waiting.
Almost heard it one morning, shoveling snow
as a neighbor’s open garage rattled with machinery,
boatbuilding tools, a thrum he knew to ignore.
Damn fool, Father said, might as well build it with needles,

but the spell held the boy. To watch the needling
of a board through a notch was to see a wooden sea-
dragon and dream of riding it away. Boy, don’t ignore
me. A lip split open. Shovel. Father hated waiting
and had even less patience for the broken machine
coughing exhaust in the yard, clutching a snow-

colored stone in its throat. Yes, he prayed the snow-
blower would take Father’s hand. Yes, the needle
of Mother’s scream, as the thumb was machined
clean off, brought icicles down. The boy listened for the sea.
Gripped his shovel. Gripped his oar. Now, in a waiting
room, he bows to the florescent hum and begs. Ignore

my prayer, goes his stupid little prayer, please ignore
my voice. The thumb in a jar packed with snow,
will take a miracle for doctors to reattach. Waiting,
as if to plead, Let me try my hand, give me the needle,
Mother taps a knitting needle against the sea-
foam-colored formica, rapid as a machine,

but the Machine God, still busy with the lights, ignores
the needle’s morse code prayer, while the boy waits
for snowmelt in his mouth to taste of oak and sea.


Tell me I once came close, that your body wasn’t
an obelisk, and mine, so much wire wound
around wire. I will always wonder

if I can take you, know you will always be stronger,
and marvel at how you appear even larger
than before with my niece cupped

in your tattooed arms. I know something simple
provokes you to call: a comic book
we’ve both read, a good time

to visit, but my thumb hovers over decline
and I hold my breath before I press
against the waiting answer.

Before I left for Florida—a week after I tore
the collar of my shirt, twisting out
of your grip, a week after

I disappeared with our shared car, the Venture
minivan we nicknamed Vendetta,
and brought it back to you

empty and smashed—you stopped me to tell me
to never come back. You meant it. I said
I wouldn’t. I meant flinching

is something I’d only do in oncoming light, never
the overcoat of a shadow; being the size of
a threat did strange things to my tongue.

Tell me about the night I hurled a phone receiver
at your head and the orb of blood on your lip
that seemed like it’d never fall, how you

bound me by a wrist, bruised my ribs against the floor,
and never threw a single punch. Wasn’t that
a kind of gentleness, Jabari? 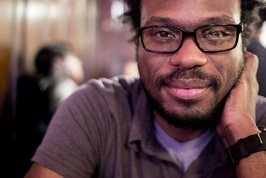 Detroiter Jamaal May is the author of Hum (Alice James Books, 2013), winner of the Beatrice Hawley Award. His poems appear widely with the most recent work found in Poetry, The Believer, Ploughshares, New England Review, and Kenyon Review. Jamaal has received fellowships and scholarships from Bread Loaf Writers Conference, Cave Canem, Callaloo Workshop, and Bucknell University where he was named the 2011-2013 Stadler Fellow. He currently acts as series editor, graphic designer, and web manager for the Organic Weapon Arts Chapbook Press.  His Hum Digital Shorts video series can be found on Youtube.