But first, the mimicry of lyrebirds.
The crescent moon, that brook

making pianos of the rocks.
A homeless woman holding spoons

in her blackened fingers, telling you
they took the city and wore her blood.

You, uneasy, offering
to buy her milk, stamps, ma'am,

I'll miss the bus. After the reading,
a man asks about your addict,

the cat-like whirring of your words,
his own garbled with vermouth:

you, in laced-up boots, you,
twelve pirouettes at a nightclub,

disco lights blue as jacaranda
against your perspiring skin.

Outside, a cloudless night,
a sky so listless it scripts egrets

into a swoop of gray. We have
left this place to the birds, left them

our uneaten apple seeds, the flashing
skeleton of a neon sign,

the partygoers talking about
the latest beheading,

your friend's friend, an amazing guy,
his eyes aloof and blue on the

laptop screen because don't look away,
because those fucking animals,

the worship of the trees is what
cleaves it. Beneath the neon, I must, I must. 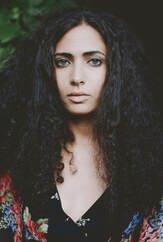 Hala Alyan is a Palestinian American writer and clinical psychologist whose work has appeared in Guernica and other literary journals. Her poetry collection Atrium was awarded the 2013 Arab American Book Award in Poetry, while her latest collection, Hijra, was selected as a winner of the 2015 Crab Orchard Series in Poetry and published by Southern Illinois University Press. Her debut novel, Salt Houses, is forthcoming by Houghton Mifflin Harcourt in 2017. She is a Lannan fellow and currently resides in Brooklyn.
The Paris-American
Copyright © 2022 The Paris-American
About • Contact • Submit • Archives • Support