I Dream of Acceptance


“The city is a cathedral of possessions; its scent is dreams. Even those who have been
rejected by it cannot leave."
--James Salter


Dream tells the story of itself, amen.
Where the water runs clear angelus
and the trees shade the part
of us that needs shade. Where the
woman in the white dress dances
along the lines drawn by
godly architects. Where the music
is Apollo's lute strung with hair.
I dream and dream and wake to find
the dreams still moving around
the room, lighting candles,
writing poems on the walls in seraph
script. I want to leave the room,
eventually, but I know this
I cannot do. I am lost to the dream now,
the one where I am accepted, the
one where finally I am the man I wrote
about to you, back in the blood college.

17   The Paris-American
My Dead Father


“Rice-field dawn--/would you were here
my dead father."
--Issa

Another Father's Day approaches
and you are still gone.
I thought perhaps this year
would be different. I stayed up all
night thinking possibly
you were lost in one of the smaller
hours. My pillow grew damned.
The light was a fuscous yellow. I
could hear the dog snoring
delicately. I put my hand out of doors
and let the starlight freckle me.
I said, Father, I am still restless and
young. I am still the boy
you wanted to be more manly, the
one you loved so fiercely your
heart burst. I miss you, I said
to the firefly. I miss you, I said to
the oak. Let this morning come
then, I said. You will not return. Not
you who told me it's not easy being alive.

18   The Paris-American
Tell Me How Tomorrow Will Be


The horses graze in the pastures
where our houses have fallen.
The bees bring sleep to
an afternoon already sodden with
heat. And the birds at the
feeder tell other birds about us, how
easy it is here, how humane.
I take your hand as the end nears.
You are a diamond. I watch the set-
ting sun make cats in your eyes.
I turn away and turn back. You
are still there. So I say, Love,
tell me how tomorrow will be. Tell
me today how tomorrow will be. 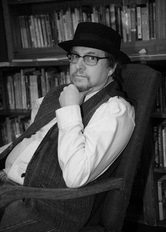 Corey Mesler has published in numerous journals and anthologies. He has published five novels, Talk: A Novel in Dialogue (2002), We Are Billion-Year-Old Carbon (2006), The Ballad of the Two Tom Mores (2010), Following Richard Brautigan (2010), and Gardner Remembers (2011), 2 full length poetry collections, Some Identity Problems (2008) and Before the Great Troubling (2011), and 3 books of short stories, Listen: 29 Short Conversations (2009), Notes toward the Story and Other Stories(2011) and I’ll Give You Something to Cry About (2011). He has also published a dozen chapbooks of both poetry and prose. He has been nominated for the Pushcart Prize numerous times, and two of his poems have been chosen for Garrison Keillor’s Writer’s Almanac. With his wife, he runs Burke’s Book Store in Memphis TN, one of the country’s oldest (1875) and best independent bookstores. He can be found at www.coreymesler.com.
The Paris-American
Copyright © 2022 The Paris-American
About • Contact • Submit • Archives • Support