The sea consumed by anxious gulls
is the sound I hear on the dark surface of things.
I follow what I call my soul
to the shore where a bonfire rages,

fronds and scraps of weed
cast off as if they were a burden.
One of us comes back from gathering, arms
full of the arms of trees

which we sling through sleeves
to scare off what we imagine hunts us.
We know others are here
because we hear, because we haven’t had a meal

and hear with our stomachs.
I can just reach over and grasp the dark air
and the dark air obliges. I can lie down
if I want to and the sand will adjust

its tongue. It isn’t so bad
this night among many,
this break in the reign of the sun.
We get to lean into the fire

to find the fire on our faces. We get to grasp
a part of an indefinite figure
and picture the whole it’s a part of,
ribbons of the night’s black hair.

We get to stay up past burning, linger
in the breath of the fire, which we inhale
and love, having wayward love
and so much of it that it turns inward

and is lost. Friend, if you are there,
come to meet me. I am drifting devoured.
I am ready to say goodnight
if you’d come meet me so I can release it.


The day is a day now that I’ve sat on the branches
above the aging crocodiles, taunted them
with my libidinous song. The secret is in marking time,

marking the many snaps of the crocodiles’ jaws
and how far their whines travel in this watery muck.
Across the street are lawyers and law clerks,

doctors and assistants to the world’s gray empire
docking overnight. They watch me and fold
their wrinkled clothes, their brows burrowing

past skin and bone and mind. What does it say
on their papers? Am I meeting or exceeding expectations,
or has some variant appeared like a Christ?

their conniving dreams. I remember sleeping
with you, blue night, in your redundancy,
letting my lids droop their delirious thoughts

like what a plane I’ve been dragging my interminable sun.
I remember the locust as the locust would, awoken
as if in a library of locusts, strange thing once said

vibrating on translucent wings. I remember
picking up a shell without that thing,
which forced men into circles, made them slaves.


The sky tries to lure me underground,
but the ground needs to open
for me to fall for it. A precedent, maybe,
but there isn’t precedent.
Or maybe an apple needs to fall
now that fall is a word I’ve used.
Time needs to pass, that’s for sure.
And I need to age. I need to love
and fall in love like an apple
shot out of a seed. Just in case,
I have a convenient packet,
and a can held up to my ear.
Words whisper themselves
without the string. And when I whisper back
it’s a lie pulling breath behind it.
But there aren’t enough lies to go around,
enough wind to whip them back
to my eyes, which do not believe
even when I see, which isn’t often. 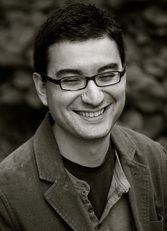 Christopher Kondrich is the author of Contrapuntal, a New Measure Poetry Prize finalist, which was recently published in the Free Verse Editions poetry series by Parlor Press. His poems have appeared in numerous print and online journals including American Letters & Commentary, Barrow Street, Boston Review, Cimarron Review, Free Verse, Meridian, Seneca Review, Verse Daily and Washington Square. He holds degrees from Fordham University, Columbia University, and is currently a PhD candidate at the University of Denver where he is an editor for Denver Quarterly.