Elegy with Crows and Canebrake

he loses his temper, puts her bitch down
for biting. Baloney, she says, hooks her thumbs

in his belt as if sex will help. Out back
the rapids of the arroyo a jagged smile

they lost a kid to one night, hiccupping
whiskey. Poor soul, the he he was

gone into the blue too soon. Before the doc
calls it ruthless, her man’s chest hollow

as a guitarra, neck a braided collar in a Kahlo
print. Before he paints his self portrait

with canebrake & demons disguised as crows,
she ropes him. Held belt, pins his back

to barbwire, & like every tooth
he’ll wiggle loose, she stores reminders.

him otherwise. Months before foxes gown
the hillside in the grey dawn, she studies

How for weeks they found signs
of the drowned boy, a fifth half-filled

with sand, the ghost’s clothes: a boot all-buried
but the toe in the wash-out, his white boxers

hung like a bandana over the arm
of a saguaro. But never the boy himself.

on the glass-thin ice over a draining lake.
A land haunted by the leaving, by what’s left. 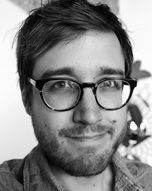 Casey Thayer holds an MFA from Northern Michigan University. His work has appeared in American Poetry Review, Devil's Lake, North American Review, Poetry, and elsewhere. This fall, he will begin a Stegner Fellowship at Stanford University.