Sure, I used to say his name like a truth that, just
by saying it aloud, I could make more true, which
makes no more sense than having called it sorrow,
when it was only the rain making the branches hang
more heavily, so that some of them, sometimes,
even touched the ground…I see that now.  I can see

how easy it is to confuse estrangement with what
comes before that, what’s really just another form
of being lost—lost, and trying to spell out wordlessly,
hand-lessly, the difference between I fell and Sir,
I’m falling.  As for emptiness spilling where no one
ever wanted it to, and becoming compassion, as for

how that happens—What if all we do is all we
can do?  What if longing, annihilation, regret are all this
life’s ever going to be, a little music thrown across and
under it, ghost-song from a cricket-box when the last
crickets have again gone silent, now, or be still forever,
as the gathering crowd, ungathering, slowly backs away?

8     The Paris-American
Since You Ask

Through the air, over water,
five crows are taking down a falcon--

the wings folding and unfolding like
any childhood looked at

then looked away from, across it

included, if you must,
then swiftly, despite whatever in a horse might count

as innocence, X, but glittering, let it 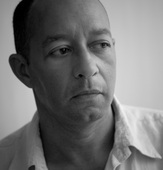 Carl Phillips is the author of twelve books, including Silverchest, forthcoming in 2013, and Double Shadow (2011), which won the Los Angeles Times Book Prize. He has also translated Sophocles's Philoctetes and has written a book of prose, Coin of the Realm: Essays on the Life and Art of Poetry. Other honors include the Kingsley Tufts Poetry Award, the Lambda Literary Award, and awards and fellowships from the American Academy of Arts and Letters, the Guggenheim Foundation, the Library of Congress, and the Academy of American Poets, to which he was named a Chancellor in 2006. Phillips teaches at Washington University in St. Louis.
The Paris-American
Copyright © 2020 The Paris-American
About • Contact • Submit • Archives • Support