﻿When times were good,
our mother bought extra hearts
for the turkey neck soup,
the largest carrot from the garden

a shock of orange in the broth,
fat glinting on the surface
hinting at more, the troth
of wealth ladled among us.

The year our father was laid off,
we savored the neck bone
and deemed it enough
as the lone carrot shone

bright on the center plate.
That neck would yield no excess.
We hunted and pecked for meat,
one heart portioned among us.﻿ 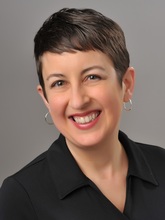 Bernadette Geyer is the author of The Scabbard of Her Throat and recipient of a Strauss Fellowship from the Arts Council of Fairfax County. Her poems have appeared in North American Review, Oxford American, Poet Lore, and elsewhere. Geyer lives in Berlin, Germany, where she works as a freelance writer and editor, and leads online workshops for The Writer’s Center.
The Paris-American
Copyright © 2022 The Paris-American
About • Contact • Submit • Archives • Support