Trees stand ready for snow & ice
slanting over far hills. An eagle coin
flipped at the blue hour spins double-
headed. Fall’s imperial purples bloody
the rival battle gear for the pigskin.
After big steaks & imaginary girlfriends,
proxy platoons hunker under helmets
like loggerheads in wishbone & pistol
formations, ready for lightning to strike
or randy billy goats to butt heads. Honor
& dishonor touch lightly as the fans cheer.
The return of every nagging in the head
sits at the base of the spine wound tight
as a mainspring of bone & gut, the hum
of silent centuries till the ball is snapped.
The peacocks spread their tail-feathers
on the sidelines of the sweaty gridiron,
hurrahing each touchdown & field goal
in the percussive air, running in place
every second left on a brutal clock.


Charlie, there’s always another story
& this morning I’m searching again
for that photo of you & Einstein
horsing around for the Rolleiflex.
Or, maybe you’re only living
in New Hope with Chan, & on the bus
reading The New York Times,
heading to a gig in the Big Apple.
Or the Charlie in this story is Chaplin
clowning for the camera with Albert.
Or, maybe, I’ll search on the web
to see if I can buy a glimpse
of you from the other side,
while “Relaxin’ At Camarillo—Take C”
fills the room. That damn photograph
is still bugging me. He’s on his violin
& you’re on alto. Kansas City Lightning,
man, I think you already know Monk
& Baroness Pannonica are gone, too.
They took the plaque off the house
on the corner where you used to live
across from Tompkins Square Park,
but you’re still the most famous
guy on the street around here. 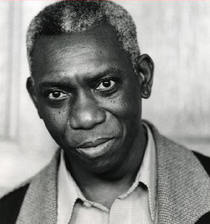 Yusef Komunyakaa's most recent book is entitled The Chameleon Couch (Farrar Strauss and Giroux, 2011), which was shortlisted for the 2012 International Griffin Poetry Prize. He is also a recipient of the Kingsley Tufts Poetry Award and Pulitzer Prize for his collection Neon Vernacular (Wesleyan University Press, 1994). Currently, he teaches at New York University and is a famous member of the Fellowship of Southern Writers.