If bites inflict prophecy, tear my flesh
with your teeth. If you see the future
in my blood, wait first. Don’t tell me.
I want to know the future but I also
want it to be a surprise. Heaven or hell.
Love in so many words. Or maybe war.
Or just disease, hunger. Terrible, terrible
hunger. The future keeps the owl’s head
turning around the fragile axle of its
small body, my hands from plumbing
the canyons & rough scratch of your thighs.
The urge to know is overwhelming.
My eyes will rupture at the mere suggestion
of ecstasy. Tonight I will be good & silent.
At sunrise I will sing I am open, I am open,
I am free. But I won’t be. Not while you
mesmerize me with your thick biceps
& whatever words in whatever language
you tattooed on them. I already know
where this union is heading: the rain
wetting my tongue, the earth dirty between
my small, ugly toes. I want your body
to tell me something I don’t know, a different
future written on the skin, not inside
the mouth of a deer resting its head
against the hollow cough of a hunting rifle.


Our bodies met between
two loose pages of the Bible.

We came to bleed for a higher
power: God in the stars, a satellite.

Both glimmered with the same
promise, the promise of ascension.
We raised our pistols to the stratosphere,

removed our yarmulkes. Wrapped
our tongues in barbed wire.

Every bone crumbling inside us
recasts itself in fire.

To face a future suspended
from the rafters, wings
splayed open like a question,

a little blood in our mouths
tells us we’re alive. 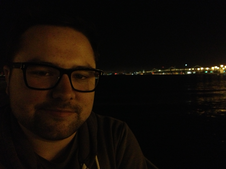 Tory Adkisson was born in West Covina and grew up in the California High Desert. His poems have appeared widely in such journals as Third Coast, Linebreak, Quarterly West, Mid-American Review, Los Angeles Review, 32 Poems, Best New Poets 2012, and elsewhere. He holds an MFA in creative writing from The Ohio State University, and currently lives in the San Francisco Bay Area where he is at work on his first collection of poems.
The Paris-American
Copyright © 2022 The Paris-American
About • Contact • Submit • Archives • Support