Quiet as a seed, and as guarded,
our walking took the shape of two people
uneasy together. I had the feeling
that on the anxious incline of that hill we gave the hill
a reason to be. What loneliness, what
privacy was in that? Hey, I said. Race me to the top?
Then is when I nearly tripped on the sly earth,
an earth shaping to itself again. A stone?
But, no, picking it up, bringing the wormed-through
black flesh of it to my height, I knew it for
an apple and gnashed and let the juices freak and down
my face. Don’t ask me why I did it. I know.
I know there are poisons like these we have
to feed each other, promises we try to hold--
though how can they be contained? I wanted to give you
what I could of me. To be personal, without
confession. I wanted to believe in the constancy of that hill.
Daylight was tiring. The air, secret, alone.
I won, you said. You did, I said. So we stood there.


I’ll show you a bone made to hold on to.
A pip. A dense fire in which once
the thinking imagination sprawled
like a breathing vine. He would put the skull
on the table (And nearest to the worn
flowers, sir, or nearer to the flute?) turned
just so so not to be too crude. That
was the boy’s job, this cage with a debt
in it (And whose boy am I, and what is
my name?). Black erasing blackness,
body and backdrop: you are not permitted to enter
the question light asks of his skin as if it were
a field, a mind, a word inclined to be
entered. It’s true: his face, his boyhood even
(And what is my boyhood, and where is it from?)
would fade if not for the rope of attention
yanked glittering across that face. Look.
This is my painting, my version of the Dutch
stilleven. I’m trying to write obsession
into it, and can. Open your eyes. Don’t run.
Vanitas, from the Latin, for“emptiness,”
“meaningless”—but what nothing can exist
if thought does, if the drawn likeness of a bone
still exists? Why trust the Old Masters? Old
Masters, never trust me. Listen: each day
is a Negro boy, chained, slogging out of the waves,
panting, gripping the sum of his captain, the head,
ripped off, the blood purpling down, the red
hair flossed between the knuckles, swinging it
before him like judgment, saying to the mist,
then not, then quietly only to himself, This is what
I’ll do to you, what you dream I do, sir, if you like it. 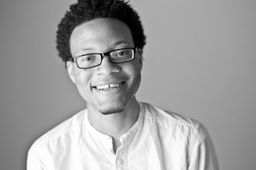 Rickey Laurentiis was born in New Orleans, Louisiana. He's the recipient of fellowships  from the Cave Canem Foundation, the Civitella Ranieri Foundation in Italy, the  National Endowment for the Arts, the Ruth Lilly Fellowship from the Poetry Foundation, and a Chancellor’s Fellowship from Washington University in St. Louis, where he received his MFA. The author of the e-chapbook, Whipped, (Floating Wolf Quarterly), he has been a featured poet in the March 2013 issue of T, the New York Times Style Magazine, and his poems have appeared or are forthcoming in several journals, including Boston Review, Callaloo, Fence, jubilat, Oxford American and Poetry.
The Paris-American
Copyright © 2022 The Paris-American
About • Contact • Submit • Archives • Support