As it was for the ancients, it would be for me: songs written down
in pictures.  The one about the trees on fire

when I came upon them, and the grass flattened around me--
that was what I saw.
The trees are like a fresco,
I thought, insofar as they are gold and tell a story.

76   The Paris-American
Heaven and Earth


Yesterday in an orchard
near Cambridgeshire,
they unearthed her, the Anglo-Saxon princess, still asleep

on her bed.  She was sixteen. Christianity was something new
when her family converted,
so a garnet cross was stitched like mercy

to her dress.  There was a picture of it.
Of the iron knife also,
and the chatelaine hanging from her belt, a handful

of beads painted with wolves
and swallows. The little beaks and claws outlasted the leather purse
that kept them.  You and I had just woken up

when I read this.  I wanted to cut it out and read it to you
on the long drive tomorrow,
so I searched through the boxes we’d packed for the scissors. 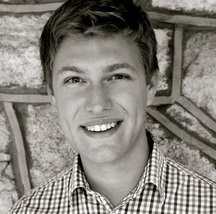 Richie Hofmann is the recipient of a 2012 Ruth Lilly Fellowship from the Poetry Foundation.  His poems appear or are forthcoming in Ploughshares, Poetry, New England Review, and the New Yorker, among others.  His poetic sequence, “Old World Elegy,” winner of the Memorious Art Song Contest, is being set by composer Brian Baxter and will premiere at the Poetry Foundation in Chicago in May 2013.  More information at www.richiehofmann.com.