Out of the Ruins

out eye sockets, soundless ear wells, lips.
But here these heads are faceless, attached to bodies

in death: the casts of Pompeii. In the rotted absence
of a body buried and bound in ash, a negative forms.

When filled with plaster, a body rises back up
as a replication that can be repeated. Still,

the void is the only maker. The figures wait
in a foggy gallery, hunched, fingers pressing

cloth to the blank where there would be a mouth,
trying to keep a volcano out. Sprawled,

shackled. Either way, there would be no escape–
the figure of the man echoes the dog who,

also chained, is on his back in the moment of death,
an act of supplication. Across the room (the city,

everywhere this is happening), a man reaches, still,
for his lover. Knowing one dies first.

Even then, in sure death, someone is left. 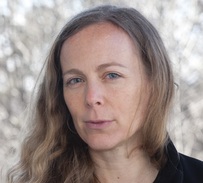 Rebecca Morgan Frank is the author of Little Murders Everywhere (Salmon 2012), a finalist for the Kate Tufts Discovery Award. She received the Poetry Society of America's 2010 Alice Fay di Castagnola Award for her new manuscript in progress. She is co-founder and editor of the online magazine Memorious, and she teaches at the University of Southern Mississippi's Center for Writers.