Because Living Alone is Easier with a Dog


For us, a dusting of October snow
promised annihilation. A blue
glow from wood burning stove, our life
expectancy. If the flame went out
we would shiver against each other
willing body heat to finally warm us.
We were able to experience joy once
when the shade of our oak died
and sunlight slipped through limbs
before Autumn could burn leaves
from their stems. We justified our fuel
source for that winter
and lived like rich men--
I played my violin and you stomped
through snow melting under your paws
on hardwood floors like a bass drum
to keep time--
How you were so sad
when I had to burn my fiddle for warmth
still makes me cringe to recall. My first mistake:
whiskey, sure, and the second was trust
in the Farmer’s Almanac for mild weather.
We were having such a ball
fiddling good jigs with strong booze
that I failed to judge October snow right.
By December we’d run out of wood.
We both got sick. I recovered easy but you
worsened as December revolved around
the North Star. Because living alone
is easier with a dog, I didn’t shoot you
at first. Selfish, yes, but you’d be the first
dog I’d shoot, and perhaps for that reason,
I felt like I had to savor that
cowlick in time. I used a .22 rifle,
over my .38, because I knew the blast
would send a bullet into your skull
to rattle through your brain
like banjo twang and mutilate life
without an exit wound and freed then,
along with a single spent shell
knocking on the floor where we'd danced,
was every loyalty in your mind.
I pulled the shutters down,
placed the casing on the frozen mantle,
filled a tea cup with water warmed
in my hands wrecked from a .22 recoil
weak in that numb afternoon. I let snow drift
outside my window and hoped it would mask
where you should have been alive
in the corner under my writing desk
dreaming up poems for me to write
while you ran through your sleep like trust.

62   The Paris-American
The Polaroid in my Yard


One corner chewed away by rain and me
and shoestring grass clings to it like wind is for humans
alone to harness for travel. Under air the hue
of harvest I run my finger over the torn corner,
memorize the man behind the camera. A woman in focus throws
wheat. Hair in acoustic curls along the ridge of her chin.
Green and alabaster water for eyesight. The lens, always clean,
streams toward the spot he'd swallow petroleum for
to find just once, if they'd happen to be drunk together, in wine
soaked sheets on New Year's Eve with Christmas still
crushing their radio to static, wine glasses broken in stars
across the floor lit up like fireworks when ambulance lights
fall through the blinds. Nothing important missing from the photo but her
hands ripped away at the corner, floating around on their own.
If you've ever seen a lampshade fill with light then you'd know
he loves her and she'll flip the switch
on and off until the bulb burns out.
I fix my bite around teeth marks
already denting the photograph. A perfect fit.
The photographer's gall for bringing a camera.
I push the polaroid into my tin of smokes.
I'll keep it there until my next yard sale
where it will end up in a box of souvenirs from Bermuda,
renegade cutlery, and used postcards
marked, Best Offer for Everything,
and I'll say to any customer
who browses her still life,
She threw
copper grains
against autumn eyes
swollen brown. 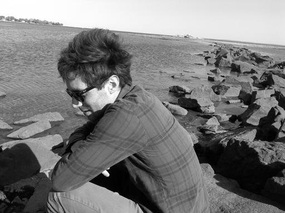 Nick Aiezza received his MA from Manhattanville College where he served as Poetry Editor of Inkwell. Currently, he lives in the Finger Lakes region of New York state.