in the way a firing pin touches
off a round, sending it spinning

from a barrel’s mouth and into
the pith of its target, let us

hear. Let us turn to explosions
on television screens, their glow

the concussive rush that brands
us as survivors. Insallah.  God

willing. We are in the fast burn,
the nuance of a suicide bomber’s

cool with the shouts of boys
selling dates, of men gathered

to smoke tobacco, until heat
radiates from a center-blast,

expands from its source, names
us among the living.


Near Karbala, I’m told to imagine the Hanging
Gardens of Babylon, their walls coffined deep

beneath where we, in tanks, rattle through dust.
Here, the dead are prepared to meet mourning

not by lovers or kin, but the constancy of sand
moving under the Euphrates’ surface, its face

mirror to the living—fishermen joined to drag
nets across hours and slow yards, until water,

confident of its work, yields a body scrubbed
clean of bloom from bullet holes and shrapnel.

Three days home, a soldier is found tethered
by belt leather to the freedom of his doorframe. 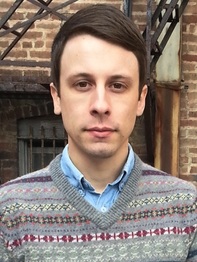 Michael Loruss is a native Californian, a veteran of the United States Army, and an alumnus of Berea College, where he studied English literature. Currently, he is an MFA candidate in creative writing at Hollins University, and serves as assistant editor for The Hollins Critic. He is a coordinator for One Night Standing—a community reading series in Roanoke,  Virginia—and is founding editor of DIALOGIST (a forthcoming quarterly journal of poetry and art), as well as assistant poetry editor for Impeachable literary journal. His work has recently been featured in Guernica, and is forthcoming in PANK, No.  8.