After the war disfigured
they gave men effigies of their faces
cast by sculptors.

They took sculptors
who learned first to mar,
that ruin

always precedes art,
and gave them soldiers.
Then soldiers they taught first

to mar effigies
of men
were given sculptors.

the son is pointing where
their kingdoms meet.
But where the father looks he sees

only poor in the boy’s kingdom:
a cemetery cleared
of headstones for the poor

to make gardens, a mother
who pulled out bones
with her potatoes

assuring her daughter the bones
once made a horse.
The father sees the girl

assemble the bones into figures,
dress them in potato skins.
They are headless. They guard

her kingdom. Some have shoots
growing from their eyes.
The father sees the mother

remake the same small hole
with her hands. He confuses repetition
for digging. The father says

there are only poor in your kingdom.
The son forgets
what kingdom means. 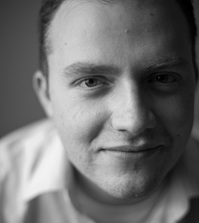 Mario Chard was born in northern Utah and educated at Weber State University, Purdue University, and Stanford University as a Wallace Stegner Fellow in Poetry. Recent poems have appeared or are forthcoming in the Beloit Poetry Journal, Boston Review, Colorado Review, FIELD, and Indiana Review, among others. A winner of the 2012 “Discovery” / Boston Review Poetry Prize, he currently writes and teaches in Utah where he lives with his wife and sons.