If language formed a center. If the center were true
and tugging. If the tugging kinged us and we were
fully assembled.
If we were translated into compasses and the wind
spun us around. If the ground imagined
us raveled.
If we strung milkweed around our shoulders
and walked north. If we found a little house
and labeled it covet.
If it were contemptible to be personal and diamondly
lit. If we bathed. If the neighbors
watched us bathe.
If we knew our way around a waist and an equation.
If dirty were a symptom of wonder. If we were
dirty with wonder.
If we slapped a tender star and remembered our god.
If remembering is always suffering. If there were a term
for suffering in thought.
If thought were radioactive and red. If we wandered
through a gallery of horsetails. If we thought it was
modern architecture.
If the mechanics of thought were the mechanics of
architecture. If we could build thinking with a chisel
and hair.
If we are scared to let go of our hotness. If hotness is
a menial term. If hotness had anything to do
with the equation.
If our bodies were a hundred lying birds. If our bodies
were disassembled. If we are failing and failing is
gathered in the mind.
If we mind failing. If we leap from place to place
and never arrive at it. If we are unkinged. If we suffered
for language and a little house.
If truth is contemptible and wonder is a symptom
of god. If we could build god with a compass
and bath.
If our neighbors watch and wonder. If language
equals failure and failure is the end. If we disassemble
the center.
If we wander back to where we arrived. If the ground is
a gallery of horsetails. If we bury our failures
in the ground.
If we wait for them to bloom. If a horse comes
and pisses on them and we are
happy still.

84     The Paris-American
System of Reason 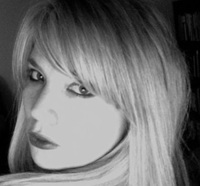 Kimberly Grey is a Wallace Stegner Fellow in Poetry at Stanford University. Her work has appeared or will appear in Tin House, A Public Space, Gulf Coast, The Southern Review, Boston Review, TriQuarterly, and elsewhere. She lives in the San Francisco Bay Area. (www.kimberlyMgrey.com)