The trick is to boil the water, he says,
then carefully drop the nugget of glass
inside. He shivers his fingers to show
the resulting steam, which will spread out thinly,
rising above his enormous head, perfectly
odorless, barely a mist in the late-day sun.
Another man walks from the camp at the riverbank,
rolling the end of his shirt like a sack.
I got one here, he says, seined us a toad.
He holds up a little black tadpole,
kicking its one black leg in the air.
Put it in the bowl, the first man says,
and positions the lighter beneath
the pipe. They watch it circle the tiny bulb
of light. Eyelessly searching the edge,
hooking and cracking its leg like a whip.
The water begins to bubble and drift,
swirl in colorless patterns of heat.
The one man laughs as the first man takes
a hit, and the spinning body, writhing now,
knocking its head against the glass,
begins to glow. 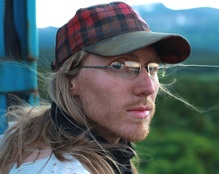 Kai Carlson-Wee has rollerbladed professionally, surfed north of the Arctic Circle, and traveled across the country by freight train. His work has appeared or is forthcoming in Linebreak, Best New Poets, Forklift Ohio, and The Missouri Review. A former Wallace Stegner Fellow, he lives in San Francisco, California, where he is a Jones Lecturer in poetry at Stanford University.