Circle of bees humming
in my womb / circle of spiders
crafting webs over & over
after rain railroads
each thread. Before you
were born, you let out
a cry––

on the walls of my uterus,
you wrote about a young poet's
fingerprints—behind my back
yours have been watermarked.

In other languages, my heart
beats us both alive, wedges
between words I speak, creating
silence to hold a dead child, running
across the Pacific from Seoul––

We share the same waters
baby girl / try my eyes:
take them out as nicely as you can––
don't scrape too hard around
the edges. In the open, I'll ask you
to stuff papers with the word
slut on the inside.


You ask me why I never pressed
charges. I drink the rest of my gin & tonic,
begin to tell you how a man

discovered eternal life in 1988. He found
it on the ocean floor. Instead of dying,
jellyfish age in reverse—bury themselves

until tiny flecks rise in gleams, endlessly
rocking. An injured medusa will sink
&reabsorb into the ocean floor--

it will wait. Eventually, a polyp will form
to reproduce a medusa. The easiest way
to make a jellyfish regenerate

is to mutilate it. It does not feel when
attacked. Someday I won't feel anymore
either. We both play dumb

of salt. Self-control is difficult for humans:
ourhearts still primitive. I scratch at skin
until a new layer reveals

impermeable. In the dim light of the bar,
all the bodies so dense, pores secreting
black. They almost disappear.

When it's time, you ask my name. Look
forJ's—you'll find them everywhere:
24 hour diners, cliffside harbors in low

sunlight—hotel rooms with unsure
women. I was there once, in a room with
a man. It was late-winter in a big city

where lights no longer cared about sounds
during sex. He taught me how to keep my body
still& thin as pine needles, how to listen

to Billie Holiday cry in the backseat of my car,
how to take a pill so a child dies—
how every spring, fewer azaleas stay

in bloom. I smelled my cunt souring,
something gone wrong—violence never
far from the hands of men:

hands around neck—my life still believing
in the yet-to-be. The future has changed.
Early bloomer, still waiting for the one poem

that will bring me home. I didn't tell you how
I used to think of all the ways to fall in front
of cars, sacrifice my body to get what I had

before. I used to pray for a new body by moon
light, a return to being human. I leave without giving
you my name. I do not believe in punishment. 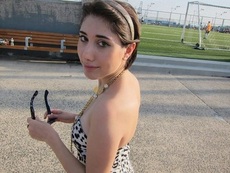 Joanna C. Valente was born in Manhattan, New York & now resides in Brooklyn. She received her MFA in poetry writing at Sarah Lawrence College. In 2011, Joanna was the recipient of the American Society of Poet’s Prize. Her work has appeared, or is forthcoming, in The Paris-American, The Atlas Review, El Aleph Press, decomP, Thrush Poetry Journal, La Fovea, The 22 Magazine, among others. In her spare time, she is a mermaid.