the sons have no idea what to do with their mother,
so they rig a raft from storm debris

and set her adrift. For awhile,
like most inventions, this sort of works.

Then bindings slack, the raft breaks apart
and the mother trudges to the other side, ankled

in a stew: clay and carp and chemo.
Come across, Boys, her whole body seems to say, waving,

though they can’t tell if she’s holding a flag
or drowned cat.

The mother waves, the sons stay.
Between the day rolls over like a body

And when they do, wading with a giant mirror,
they make the mirror a river,

tie their limbs and torsos together.
All three floating now

down a river that will empty them, filling
the valley with the creaking song their bodies make. 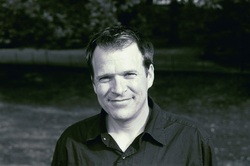 Prior to joining the faculty at Ramapo College of New Jersey, James Hoch taught at Lynchburg and Franklin and Marshall. He has worked as a dishwasher, cook, dockworker, social worker and shepherd. His poems have appeared in POETRY, Washington Post, American Poetry Review, Slate, Kenyon Review, New England Review, Virginia Quarterly Review and many others. His book, A Parade of Hands, won the Gerald Cable Award and was published in March 2003 by Silverfish Review Press. His second book, Miscreants, appeared in 2007 from WW Norton. He has received fellowships from the NEA(2007), Bread Loaf and Sewanee writers conferences, St Albans School for Boys, Summer Literary Seminars, and was the 2008 Resident Poet at The Frost Place and the 2008 Steinhardt Visiting Writer at Rutgers-Newark and is Guest Faculty at Sarah Lawrence.  He resides with his wife and sons in Garrison, NY and Seattle, WA.
The Paris-American
Copyright © 2022 The Paris-American
About • Contact • Submit • Archives • Support