I met my brother once
in a small village in Vietnam
who, upon meeting me
grabbed my small arm
& dragged me into the woods
behind his house
where a group of men
all wearing our father's face
stood in a circle, cheering
while the two roosters
whose beaks had barbed hooks
taped to them, pecked
& clawed each other open
until the mess of bloodied feathers
were replaced by two clean birds
one, my brother's. The other
a man's, who, I am told is deaf
but vicious. He told me
our father calls him long distance
from America, every week.
I can't help but wonder how
they tell the roosters apart
since the blood has turned their feathers
the same shade of burgundy.
I told him how our father, who lives
only three mile away from me
avoids making eye-contact at supermarkets.
I can tell this made him happy.
Though, he didn't cheer
when the crowd cheered, when one rooster
fell to the dirt with a gash in its neck
I knew he was the winner
the way he lowered his head to hide
his smile, how he looked at me
then snatched his earnings
from the vicious man's hands.
I learned what it was like to be a brother
by watching the roosters
& how, at first, the air was calm
until they were introduced
& then they knew:
there could only be one.


It's not bad luck to name your goldfish
after the goldfish that has already died,


right? It seems impossible, on days like this,
to walk to work and not daydream


of ways to make eye-contact
with people wearing sunglasses.


It usually involves tripping or love.
My mother never told me the no glove rule,


in my bedroom. One day, if I'm lucky
enough to outlive my mother, I will pick the photo


of her with the perm--she fears this the most--
that, and having a son ruined by want,


by the endless limbs of other sons.
My mother never told me about the first boy


She flushed my old body down the toilet,
then took my photo off the wall. 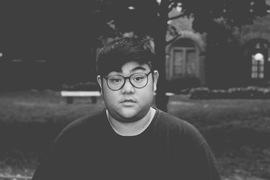 Hieu Minh Nguyen is the author of This Way to the Sugar (Write Bloody Press, 2014). Hieu is a Kundiman fellow, a recipient of the Minnesota Emerging Writers’ Grant from The Loft Literary Center, and recently appeared in Poets & Writers 2014 Debut Poets feature. His work has also appeared or is forthcoming in publications such as The Journal, PANK, Anti, Muzzle, Vinyl, Indiana Review, and other journals. He also works at a haberdashery.
The Paris-American
Copyright © 2022 The Paris-American
About • Contact • Submit • Archives • Support