We put him in the Sound, all that was left
of Mom’s boyfriend a memory of waves,

fine crumble of earth after coals burned out.
We were so far from the sun the birds fled,

but whitecaps recalled their fresh ghosts,
shudder of flight without flight. They know

nothing on earth can hold its form for long;
that the sun troubles water as it rises.


131 The Paris-American
Gods of the North


Her first steps shake snow down
from the mountains where her father
taught her to skate, to cleave night

on slender points of bone dredged
from the wet death of an ox,
purple braid of offal steaming

like a husband’s tongue between
her lips in offering. Other gods
call her Skadi, name her harm,

she who dismisses the ocean
for thick-skinned rivers to the north,
sluggish ligaments of appetite

that devour boys in the cracking
each spring. They struck her
father from the sky and burned him,

the first pyre of many she’d come to know.
Marry me, she told the god, but first
show me your feet; show me you can

fill the shoes of my father, who could
flicker like lightning over the river,
muscle of minnow fleeting below.

She wants ice, asks for fists
and bone fractures and victory,
bloody tremble of rubies on a split lip,

nicked veins, psalms of defeat.
Light it up, men, for Skadi. Pledge
sleet in your cities. Speak often of snow. 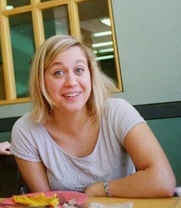 Eve Strillacci, a product of the Hollins University MFA program, now works at a cooking store and sleeps in an attic the approximate temperature of a Jacuzzi. Her work has recently appeared in Birdfeast, Sixth Finch, JMWW, and elsewhere. In 2013 she was a recipient of the Gertrude Claytor Poetry prize. All Eve’s poems have been be grudgingly proofread by her feisty identical twin, and any success is likely due to this.