By previous efforts. A water bottle, Lay’s bag. At Hisarlık--
ATrojan in its chintzy foil. The object not of but now

And ordinary, indelible. The great finds then must all be marked
By objects from without. A walking stick dropped

In terror or awe by one of the Chinese laborers at Lintong,
Or even, if you set your mind’s dial to it, you can tune in to the image

Of Howard Carter’s handgun in its final resting place a kilometer
Outside Tutankhamen’s. And consequently, the new archaeologists

Will someday dig for the old archaeologists—Timexes and ink
Wells and unopened cans of beer or beans, trowels and footballs

Among the long catalogue of half-advances, half-defeats in looking
For god(s) or man, whichever came first or last. Or them between. 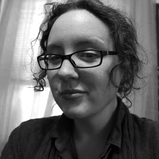 Emilia Phillips is the author of Signaletics, forthcoming from the  University of Akron Press in August 2013, and two chapbooks including Bestiary of Gall, forthcoming from Sundress Publications in April 2013.  Her poetry has appeared in AGNI, Hayden's Ferry Review, Green Mountains Review, The Journal, The Kenyon Review, Narrative, and elsewhere. She teaches at Virginia Commonwealth University where she received her MFA in 2012 and serves as the prose editor of 32 Poems. She will join Gettysburg College in August as the 2013–2014 Emerging  Writer Lecturer.
The Paris-American
Copyright © 2022 The Paris-American
About • Contact • Submit • Archives • Support