and now you are a witch doctor.
Shake the rain onto the blinds

and over the abdomens of others.
Make the dance specially haunted.

My father’s a zumbi. He dances
in a little shop he’s bought

of fixing things. Through the white-wash
on the windows I hear steel grind

and strings twang. He dances
La Tarantella like a maiden

courting the poltergeist of Sunday morning
itching his bites and sweating out poison.


The rain the house lets in is birth.
In the dry season
the rainless wood is death.

But the people think us poor.

If they bring it up again
tell them we’re physisaphiles.
Where’s your brother? That wild––

He’s in the flowerbed with a magnifying glass
learning of the aphid and the cabbage maggot
trying not to burn the calyx, stalk, and bine
with his exacting science
of distance and still hands.
He’s the garden and the tremulous map.
There’s an X marked with treasure
and he’s trailing a blaze,
burning out from a shot in the arm and frenzy feeding.
It’s Magnificat!
His soul magnifies, Mom.
He will be metempsychosised firefly,
imagine, contrapassoed glorious!

Because that is the way he lived and sinned:
with the soft light of his green eyes
going bright and black
bright and black
at the sea with the earth at his back.
But he thinks that in this other state
I can house him here,
I can make our house a home
on account of all the holes.
He believes he can live off rationed rain,
eat our bound papers, and suck the pulp
out of the wood
as if Adam hadn’t swerved,
as if there wouldn’t be a shadow at the door. 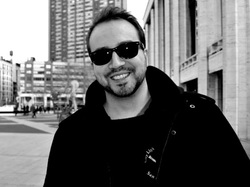 Colin Dekeersgieter holds degrees from The University of Vermont and The City University of New York, Graduate Center. He is a Pushcart nominee with work featured in The Worcester Review, Out of Our, The Poetry Quarterly and elsewhere. He lives and writes in New York City.