How to Make a Tableau of Time and Horses


It is too bad that horses are not music
From the tender Gemeinhardt harp in the piano
She played while I ate hominy and grits
With her father from plates that would not reflect
Our faces or what years of sustenance will do.
I took his death hard.
I was poorly-made, bent and cross-threaded
As an old screw, hammer-clawed from matter
Without being told what I was and having
No idea what to tell the rust.
A grazing animal must see each
Side separately while straight ahead the blank.
It is easy to spoof at solecism.
They were their own, I know, pulling
Tresses of dust behind them in the summer
Like spectral wagons to the hum of circus tunes,
And it would be wrong to call them songs.
If only lunging (sweating it out into wellness on a long rope)
And the resultant froth could cure us of nostalgia
Or regenerate dead cells or at least pay tribute
To the blueness of her eyes.
The dead dog’s leash still hangs clanging
At the gate.  It is late to be opening doors
For imaginary dogs. Now
There are bad mornings that whistle in the ditches,
Rust on the canary-yellow tractor, reins strung
Through dull gold martingale rings,
Hoof walls filled with muck, sore hands
Descending melodically.  And of the girl,
Our mawkish allegiances ablated like saddle skin,
I’ll say we rode into tomorrow or the blue
Of dusk while summer arpeggiated leaves,
And the roiled muscles of the neck
Made that classic arch. 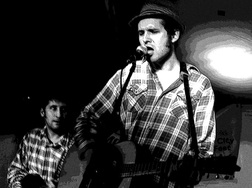 Cal Freeman was born and raised in Detroit.  He received his BA from University of Detroit Mercy and his MFA from Bowling Green State University.  His writing has appeared in several journals including Commonweal, The Journal, Drunken Boat, Birmingham Poetry Review, and /nor.  He has been nominated for Pushcart Prizes in poetry and creative nonfiction.  He currently lives in Dearborn, MI with his wife and teaches at Oakland University.
The Paris-American
Copyright © 2022 The Paris-American
About • Contact • Submit • Archives • Support