A loose flap of skin passes just below
his eye. Bruises ride the bridge of my nose.
The dark ropes of handprints grip
both our necks. Our fresh buzz-cuts
lumpy with goose eggs. It's easy to forget
we were trying to kill each other.
Or at least I was. But what I wonder now
is why our father shot the photo before
he bandaged the hole where the nail
went in, stuffed my raw mouth with gauze.
We stand side by side against the garage,
eyes focused just beyond the lens,
each pointing at what we did to the other. 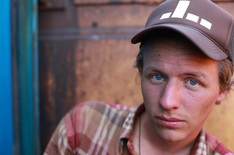 Anders Carlson-Wee was a professional rollerblader before he studied wilderness survival and started hopping freight trains to see the country. He is the winner of Ninth Letter's 2014 Poetry Award, New Delta Review's 2014 Editors' Choice Prize, a Dorothy Sargent Rosenberg Poetry Prize, and is a two-time nominee for a Pushcart Prize. His work has appeared in Linebreak, Ninth Letter online, New Delta Review, The Pinch, Best New Poets 2012, and is forthcoming in Ninth Letter and Best New Poets 2014. The recipient of scholarships from the Bread Loaf Writers' Conference and the Sewanee Writers' Conference, Anders is currently an MFA candidate in poetry at Vanderbilt University.
The Paris-American
Copyright © 2021 The Paris-American
About • Contact • Submit • Archives • Support